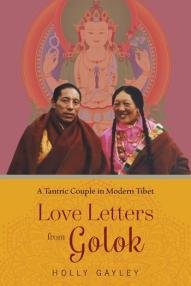 The paperback is now out for Love Letters from Golok: A Tantric Couple in Modern Tibet, which chronicles the lives and letters of Khandro Tare Lhamo (1938–2002) and Namtrul Rinpoche (1944–2011). This Buddhist tantric couple played a significant role in revitalizing Buddhist teachings, practices, and institutions in the Tibetan region of Golok during post-Mao era.

Get 30% off at Columbia University Press with discount code: GAYLEY.
Read select letters in current issue of Tricyle Magazine.

I began this research project in 2004, when I first visited Golok. On that occasion, Namtrul Rinpoche kindly gave me their published corpus of revelations and an extra volume containing his correspondence with Tare Lhamo over more than a year, beginning in 1978. Their letters are almost entirely in verse, containing prophecies about their future revelations and intimate expressions of affection. The interplay of love and destiny in their letters and lives is a central theme in the book, alongside strategies for narrating cultural trauma related to their coming of age during the Maoist period. Read more…