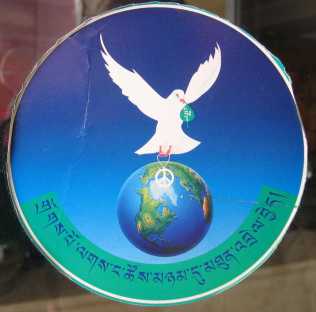 In the last decade on the Tibetan plateau and in the diaspora, several movements have emerged that interlink Tibetan identity and Buddhist ethics. These include the new “ten virtues” (dge bcu) promoted by Larung Buddhist Academy in eastern Tibet, the Lhakar or ‘White Wednesday’ (lhag dkar) movement underway since 2009, trends in Tibetan pop music, the ‘amulet for peace’ (zhi bde rtags ma) introduced in 2012, and more.

I trace these in a chapter on “Buddhist Ethics in Contemporary Tibet” published in the new Oxford Handbook of Buddhist Ethics (2018). The chapter explores ethical reform as a constructive process of subject formation in which loyalty to Tibetan culture and devotion to Buddhist teachers overlap. It is the culmination of several publications on Ethical Reform in Eastern Tibet.

Photo: The image for the “amulet for peace” combines global symbols for peace (dove and peace sign) with Buddhist imagery, a bodhi leave with the seed syllable Hrih on it. On this sticker, the Tibetan reads: “Friends, let’s create harmonious relations together.” Read more about the amulet for peace in an article I co-authored with Professor Padma ‘tsho, “Non-Violence as a Shifting Signifier on the Tibetan Plateau” in the journal, Contemporary Buddhism. Photo Credit: Holly Gayley.